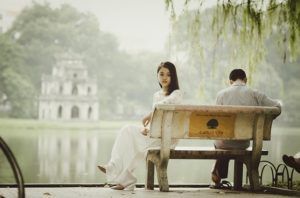 This particular tale of woe is told from the point of view of a woman. However, this is not a gender specific problem and just as many women make many of the unforgivable dating mistakes listed below as men do.

It should have been one of those great stories that Sally could have told her grandchildren about. Mr. Clueless and Sally had met on match.com 5 years earlier but passed each other by because they were GU (geographically undesirable). In the interim, He met a girl on match and married and divorced again. She had long forgotten about this man and was surprised to hear from him again.

After rejoining match.com, Sally, had received several messages stating that he was the same man that tried to contact her years ago. Sally was busy with life and didn’t pay much attention to the messages. Finally, one cold winter evening before Christmas she agreed to meet him for a drink at a local pub. They hit it off right away and were inseparable from that moment on. Unfortunately, in the six weeks following that initial romantic encounter where sparks flew Mr. Clueless killed what could have been something wonderful. Below are 8 rules of what NEVER to do when beginning a new relationship!

1.) Do NOT talk about your Ex- This is one of the cardinal rules of dating….the “Big Deal Breaker” …never , ever bring up the story, issues or images of your previous relationship. By making this huge mistake, there is the possibility that you will put images of your ex in your dates mind that will not be possible to overcome. For example, telling your partner that your ex used to race speedboats and had a body to die for, or your ex was a petite little blonde that everyone looked at when you were with her…etc. etc… Get the idea?

2.) Do Not make plans and then show up late for everything from dinner reservations to a movie. It is not romantic or seductive to miss your reservations or sit in the first row at a movie theatre because your date couldn’t get it together to show up on time. If you’re going to get together, do so with consideration for making plans in a timely manner and not putting your date in an uncomfortable situation.

3.) Do NOT bring your children, mother, or puppies on a date with you during the first 6 weeks of dating. It is great that you think so much of your date that you want them to meet “the family”. However these first very tenuous weeks of dating are either the ‘making it or breaking it’ time for the relationship. This is the time to look into your partners eyes, hold hands, spill your soul (to a point) and get to know one another. A casual dinner because your young adult kids are in the area is one thing…to ask your date to hang out with you and your 16 year old kid on a Saturday night… after you pick them up from their job at Wendy’s, is not a good idea. There is plenty of time for that “comfort zone” with one another…not during the first month or so of dating.

4.) Do NOT tell your date that you don’t think of her during the week and you don’t think of anything or anyone during the week because you’re to busy working. Both women and men can often accidently throw themselves into their jobs to the point that getting together seems like a chore to your respective date. Be careful of not making your partner feel that they are just a “convenience.”

5.) Do NOT rush your date off the telephone stating that you need to watch your favorite TV show. Some people like to talk for hours…others are not great phone conversationalists. That’s ok….simply pick a time that you can speak at ease and not make the other person feel that the TV show,  “The Good Wife” was a hotter choice than she was.

6.) DON’T tell your date, when she tells you her car is having problems with the engine… ”Awww…come on over to my place anyway, “I’ll come get you if you break down.”
Selfishness never gets you points. Women want to know that their man is looking out for them and that they’d not want to put them in a vulnerable or dangerous situation. Sorry guys, chivalry is not dead yet.

7.) Do NOT tell your date that you’re libido is off because, “I guess we just always want what we can’t have.” Yes it’s true that men and women are not always “in the mood” at the same time. However…some thoughts should simply be that a passing thought that is never spoken out loud!

So… to all those guys out there that claim they just can’t find a good women, please take heed to the rules above. You’ll find that most of this is just common sense, however, often times one doesn’t remember to think before they speak. It is to your advantage to have a “dating filter” on your mouth before you  “open mouth…insert foot” !